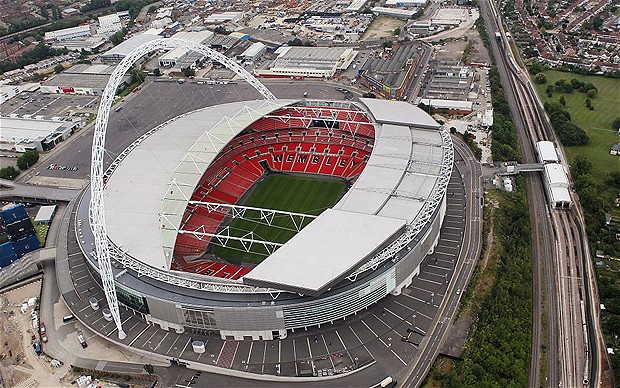 General Stadium Facts
• The new Wembley reopened its doors in 2007
• The original Wembley Stadium was known as the Empire Stadium, and was built as the centrepiece of a British Empire Exhibition at the end of the First World War
• The stadium has a circumference of 1 km
• There are 107 steps in the trophy presentation route – the old stadium had 39 steps
• The new Wembley encloses 4,000,000 m³ inside its walls and under its roof. This is the equivalent of 25,000 double-decker buses or 7 billion pints of milk
• The deepest of the piles that form the foundations, at 35 metres, is as deep as the Twin Towers were tall
• The new pitch is four metres lower than the previous pitch
• The stadium’s pitch is enhanced by desso technology which combines synthetic grass with the real Wembley grass to strengthen the surface
• This system provides a consistently high standard playing surface at Wembley and enables the multi-use venue to host football, rugby, American football and music events
• The pitch is covered by specially designed protective panels for rock concerts which creates space for up 25,000 fans to stand
• Each of the two giant screens in new stadium is the size of 600 domestic television sets
• The total length of the escalators is the same as a 400 metre running track
• The Royal Box is in the traditional position – in the middle of the north stand – as in the old Wembley Stadium

The Arch and the Roof
• The most striking, highly visible feature of the stadium is 133 metre tall arch that sits above the north stand
• With a span of 315 metres, the arch is the longest single span roof structure in the world and is visible right across London
• With a diameter of 7.4 metres the arch is wide enough for a Channel Tunnel train to run through
• A representative from every county in England was involved in the construction of the arch
• The stadium roof rises to 52 metres above the pitch. This compares to the 35 metres tall Twin Towers of the old stadium
• The roof is over 11 acres, of which four of the acres are retractable
• The stadium has a sliding roof design which allows the pitch to be exposed to direct sunlight and ventilation whilst ensuring that spectators are covered
• The arch supports all of the weight of the north roof and 60 per cent of the weight of the southern side
• The arch ensures that there are no pillars in the new stadium which could obstruct the views of fans

The Seats
• The stadium has 90,000 seats with no obstructed views
• There are 310 wheelchair spaces and 400 press seats
• The rows of seating, if placed end to end, would stretch 54 kilometres
• There is more leg room in every seat in Wembley Stadium than there was in the Royal Box of the old stadium
• The stadium was designed with stands that are higher and closer to the pitch than the original stadium and with better uninterrupted views

Our site uses cookies to improve your experience. By continuing to browse the site, you are agreeing to our use of cookies.

We may request cookies to be set on your device. We use cookies to let us know when you visit our websites, how you interact with us, to enrich your user experience, and to customize your relationship with our website.

Click on the different category headings to find out more. You can also change some of your preferences. Note that blocking some types of cookies may impact your experience on our websites and the services we are able to offer.

These cookies are strictly necessary to provide you with services available through our website and to use some of its features.

Because these cookies are strictly necessary to deliver the website, you cannot refuse them without impacting how our site functions. You can block or delete them by changing your browser settings and force blocking all cookies on this website.

These cookies collect information that is used either in aggregate form to help us understand how our website is being used or how effective our marketing campaigns are, or to help us customize our website and application for you in order to enhance your experience.

If you do not want that we track your visit to our site you can disable tracking in your browser here:

We also use different external services like Google Webfonts, Google Maps and external Video providers. Since these providers may collect personal data like your IP address we allow you to block them here. Please be aware that this might heavily reduce the functionality and appearance of our site. Changes will take effect once you reload the page.

Wembley, Did You Know?
Accept settingsHide notification only